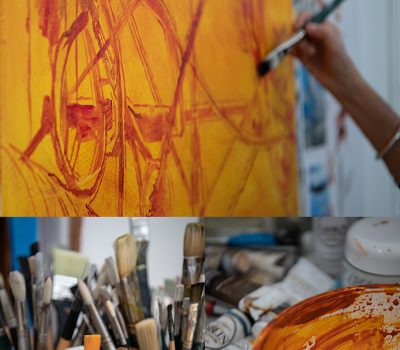 I’m currently interested in ‘looking up’ – it can be a close up of a power pole with its tangle of complex wires, an interesting architectural detail, the sea or a decayed crumbling structure – and its interaction with light.

When looking up you see another (largely untouched) world against an endless open sky. You see details that are often remnants from another time and seldom noticed. but they are rather beautiful the way they catch the light.

The subject may be local, in suburbia or further afield in a country town. My paintings are not about history or preservation, they are contemporary views recently observed, but you still can’t help wondering what stories they could tell!

I like that haunting, vaguely musky smell of old oil soaked timber and crusty old engines caked in grease. As a child I used to watch my father potter around his cluttered garage, his tools hung neatly on the walls, each with its own special place. I was never allowed to touch anything but I loved being with him there, among those objects and his old heavy timber workbench. I guess my interest in old industrial subjects comes from those magical times with my father.

As a student, I spent much time around the industrial sites of the Balmain peninsula, gathering material
for my major work on the Sydney Harbour Ferry Services. The Colgate Avenue workshops that maintained the harbour ferries,
SG White & Co. workshops on Fitzroy Avenue, where restoration of the ferry, South Steyne would later take place (I later became
a member and volunteer of The South Steyne Steamship Preservation Society), the Balmain and White Bay Power Stations
were all rich sources of subject matter for a young student driven by a powerful need to paint and draw. Obtaining permission
to enter the workshops was easy then, especially for a young woman with a smile and a sketch book!

Influences are too many to list but I’m interested in masters of light; particularly Spanish artist Joaquin Sorolla y Bastida,
the Australian Impressionists of the Heidelberg School and the lesser known Australian Tonalist painters. Also contemporary artists Henry Hensche, Stuart Shils, Tibor Nagy, Kim Cogan, Jeremy Mann (the list goes on and on…) stimulate my fascination
with the different moods created by ever changing light.