Posted at 18:40h in Uncategorized by KingSuzy 0 Comments
0 Likes
Share

A few years ago I was commissioned to paint some various views of Balmain looking out at water.
The first painting here was part of a series of nine such views. I always liked this beautiful old timber boat,
but knew nothing about it at the time. Later, I painted a larger variation focusing more on the boat,
and entered it in the Mission to Seafarers art exhibition in Melbourne.
Now… I’m thrilled to say… my painting of the Tribal Warrior (entitled The Last Lugger)
has been selected for the First International Marine Art Exhibition!

Hosted by the American Society of Marine Artists, this specialised exhibition features 150 works by the world’s
leading marine artists. Yes! I’m so excited to be included in the exhibition, and alongside some international
artists whose work I have respected and admired for years. I’m pleased that this work is part of the Australian
contingent because Tribal Warrior has a long history, from the harsh pearling industry of yesterday to
the important work of today.

Pearling luggers of the 1800s were wooden gaff-rigged ketches with low waists working Australia’s
northern seas.Their graceful lines were a magnificent sight as the fleets entered the open sea under sail.

During WW2, many boats were requisitioned by the Australian Navy or various uses, then, as the industry
was declining, many boats were refitted for prawning and other commercial fishing activities. Cultured pearling
was finally introduced in the 1970’s.

Today only 14 boats remain.
Tribal Warrior is the oldest lugger still afloat. Repurposed as a maritime training and mentoring vessel for young Indigenous sailors, and for traditional cultural day cruises, you could say she has turned full-circle.
Today she resides in the calm waters of Blackwattle Bay in Sydney Harbour. Tribal Warrior website

Posted at 09:47h in Uncategorized by KingSuzy 0 Comments
0 Likes
Share 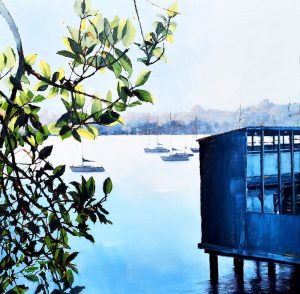 This was the first time I participated in the Grammar Art Show at Toowoomba. I thought the Balmain Art Show
was big, but this one was huge! I couldn’t be there but the online videos showed a big range of high quality
work from over 290 artists Australia wide. It would have been a mammoth curating and hanging job
so hats off to the team putting it together – it looked amazing! And I’m very pleased to be included in this show.

Down at Dawnies
oil on canvas 2021. 76 x76cm
Peeking around the side of the old dressing sheds at Balmain’s Dawn Fraser Swimming Pool.
All is quiet and still as the day comes to an end. The boats are safe on their moorings and everyone
has gone home, but this is a most beautiful serene time of the day.

This painting is now sold but I have another one,
Still Water – available online:
Toowoomba Pop Up Gallery – until MAY 2
GrammarARTshow.com for the details.

DAWN FRASER POOL HISTORY:     The baths were originally built in 1882, then enlarged in 1924, also known as Elkington Park Baths,
Balmain Baths and Whitehorse Point Baths – it was open to men during daylight hours and at limited times for women!
The Balmain Swimming Club was founded in 1884 shortly after the baths were opened.
Times changed and in 1964 the pool was renamed in honour of local swimming legend, Dawn Fraser.
Olympic Swimming Champion at three consecutive Olympic Games, Dawn Fraser learnt to swim at the baths from age 8.
Historically significant (Heritage listed in 2000), it’s an excellent example of pool architecture no longer practiced.
A landmark set in an attractive harbourside location, this recreational and social facility is strongly associated
with prominent swimming identities and world champions. Retaining its old school characteristics, the pool is
surrounded by a timber deck used for access, watching swimming races and sunbaking and at low tides there is a small
sandy beach alongside the entrance.

Posted at 18:56h in Uncategorized by KingSuzy 0 Comments
0 Likes
Share

I’m very excited that my work Rarely Seen & Dangerous has been selected
as a finalist in the Mission to Seafarers Maritime Art Award of 2020.
This is the fourth time I have been selected in this award – so I’m feeling very lucky!
This year there were 200 entries, of which 107 were selected as finalists. As this exhibition stems from Victoria,
it’s solely an online exhibition, as was the presentation night. All went smoothly.

The winners were announced last night and I was Highly Commended for my work!

Thrilled for the second time – and a wonderful surprise for me, as I have never received one of these before!
This painting now has even more meaning in relation to the work that The Mission do, because I have since learned
that the sailor sitting in the Bosun’s Chair has been stuck at sea for 11 months, like many seafarers now languishing
in limbo due to Covid. They can’t crew change and it’s becoming something of a humanitarian crisis.
The good news is his ship sailed for Australia yesterday (award-night) and is swinging by the Philippines
to crew change, as they can’t fly out of anywhere. 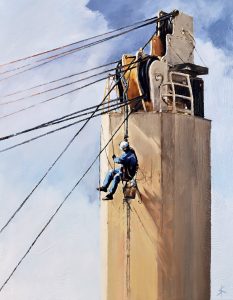 Rarely Seen & Dangerous 2020. Oil on canvas. 91x71cm.    “When work was completed and the man was being lifted up by his crew members, the lifting rope suddenly parted. As he fell, his lifeline detached from the ship side railing and he disappeared into the water…”
(Highly commended: MTSV Maritime Award 2020)
Available from Mission to Seafarers Victoria.

10 Oct A Balmain Beauty is for sale

Posted at 18:18h in Uncategorized by KingSuzy 0 Comments
0 Likes
Share

Seen today in the Mansion supplement of The Australian.
A piece of Balmain history!

The Convent of Immaculate Conception was designed by pioneer architect Edmund Blackett
in 1876. Considered to be the finest example of Gothic Revival in Sydney’s Inner West, it housed 30 borders and 10 nuns.
How different life must have been back then!

A couple of years ago, the owners commissioned this painting of 9 panels showing details of their
magnificent property and the surrounds. I’m so happy to see my work still prominently fixed to these walls!
But at the same time, I’m sad to say goodbye to the current owners. I’m so lucky to have a wonderful group
of supportive clients who keep returning to collect my work – it’s a huge compliment for an artist.
I feel very proud, and humbled. 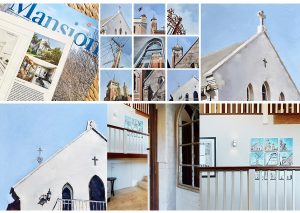 Posted at 15:22h in Uncategorized by KingSuzy 0 Comments
0 Likes
Share

This exciting show presents the best of Australian marine & maritime art
by members of the Australian Society of Marine Artists (ASMA).

It’s the Annual (National) Exhibition showcasing paintings and sculpture, contemporary
to traditional and everything in between. I have two paintings featured in the exhibition.
The show opens on 9 October – but if you can’t get there – you can see the whole exhibition on facebook.
All works are for sale – and purchases can be made directly from the Royal Art Society Gallery.

Posted at 15:42h in Uncategorized by KingSuzy 0 Comments
0 Likes
Share

The 3 you see here are now sold but 9 are still available, some from the Moree Gallery and a few from me.
The price is the same, and the Gallery provides complimentary shipping (within Australia).
(These are last ones for 2020)

I’m interested in ‘looking up’ – and the way light, shadow and texture reacts with my subjects
against the open sky above. Often these are old architectural facades, remnants from another time,
and wooden power poles with their complex tangles of wires – details that are seldom noticed.

It is not about history or preservation – they’re contemporary views recently observed, some
from suburbia and some from country towns – either way you can’t help wondering what
stories they could tell.

Posted at 19:16h in Uncategorized by KingSuzy 0 Comments
0 Likes
Share

One of inner Sydney’s most significant industrial sites and the longest serving
power station, it once marked the gateway to Balmain’s bustling industrial
waterfront. The power station was finally abandoned in 1983.

The brickwork facing Robert Street (the subject of this work and the most interesting
side of the building) is typical of the Federation Anglo-Dutch architectural style –
when lit by the sun at certain times, this face reveals a myriad of rich burnt ochre
and yellow colours. I have been painting various views of it since 2008.

Posted at 17:07h in Uncategorized by KingSuzy 0 Comments
0 Likes
Share 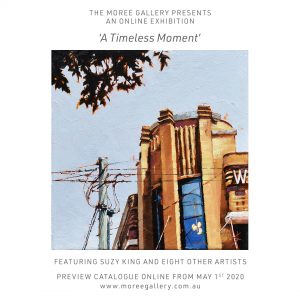 I’m very excited to be a part of this inaugural online exhibition
presented by The Moree Gallery!

Very deep! But this explains the variety of work by 9 stellar artists in this fabulous exhibition.
Apart from my facades and power poles, the exhibition includes contemporary landscape, still life, interiors
and some gorgeous flamboyant wirework.
And remember… the Gallery is generously offering free shipping on all paintings Australia wide!

Posted at 16:25h in Uncategorized by KingSuzy 0 Comments
0 Likes
Share

I’m so happy to say that two of my maritime paintings have sold – in just one week!
One sold in Hobart at the ASMA National Exhibition at the Maritime Museum, and the other
directly from my Balmain (Sydney) studio.
Who said maritime paintings don’t sell? Some poor misguided soul… (or maybe I was just very lucky!!).
Either way, there is nothing more motivating for an artist than a sale.

The money is important of course, but much more than that, we artists generally
(well, I sure do) have rather delicate egos. You might laugh, but think about
Vincent van Gogh, Mark Rothko, George Ault… and so many others.

We artists work hard, often alone, no one responds. So we think, ‘they hate my work’
‘I’m wasting my time’, and precious materials,’what’s the point’ and so on.
A sale totally changes things. Even a tiny sale. Because someone has responded to a painting
you have created, enough to part with their money (commitment) and hang it on their wall (love).

Then there’s the subject of maritime art…
Sometimes it’s not so popular, but I think that’s because the name alone conjures up
images of dusty, stodgy and dark old paintings in heavy frames.

But it really isn’t that way today. Contemporary artists produce beautiful drawings,
watercolours and pastels, they paint sails in sunlight, details and close ups of reflections & ropes,
lighthouses, docklands, the crews or just the ocean and waves.
It’s worth taking some time to view a maritime exhibition –
there’s so much more to see than you might think!

Posted at 12:00h in Uncategorized by KingSuzy 0 Comments
0 Likes
Share

Well, 2019 is almost done and dusted!
The close of 2019 has been so tragic for many, smoky and dusty for the rest of us.
Not a happy end. And sadly it looks like the holiday season will continue to be smoky, windy and dry.
But it will pass, and we are entering 2020 – the start of a brand spanking new decade!
Twenty twenty, it even sounds good. (Remember when it was two double oh one?
That sounded so awfully messy!).
Here’s to 2020! A new beginning and the best year ever, for us all!