27 Dec Some Highlights of this year

Posted at 16:31h in Uncategorized by KingSuzy 0 Comments
0 Likes
Share

🎨 I was invited to participate in a few Group Shows in rural NSW, I was offered and Artist’s Residency plus a Solo Exhibition at the New England Regional Gallery (NERAM) in Armidale!
🎨 In August I was elevated to Fellow status of Australian Society of Marine Artists (FASMA). This is a huge honour as the existing Fellows unanimously agreed that I should join the clan, and they are the finest marine artists in the country, and internationally!

🎨 I rarely enter prizes but this year I did enter the Paddington Art Prize. And I made the grade as a finalist!
That in itself was so exciting! Then I found I received the Highly Commended Award!!
The 2022 judges were: Archibald winning artist Dhungatti man Blak Douglas, Dr Grant Stevens of UNSW Art & Design and Jane Devery, Senior Curator of exhibitions MCA Australia.

The Paddington Art Prize is a $30,000 National acquisitive prize, awarded annually for a painting inspired by the Australian landscape. Established in 2004 by Arts Patron, Marlene Antico OAM, this National prize takes its place among the country’s most lucrative and highly coveted painting prizes. The prize encourages the interpretation of the landscape as a significant contemporary genre, its long tradition in Australian painting as a key contributor to our national ethos, and is a positive initiative in private patronage of the arts in Australia. The exhibition was held at Defiance Gallery in Sydney’s Paddington.

So, the Year of The Tiger was a very good one!

Posted at 21:12h in Uncategorized by KingSuzy 0 Comments
0 Likes
Share

I’m SO excited to be selected as a finalist in this year’s Paddington Art Prize!!!
I’m really honoured that they have chosen my painting of a power pole to show in a landscape award.

I do like looking up. I spend a lot of time doing that, for many reasons (of which there are more and more these days of very challenging times!), but I digress…
Wires with blue sky beyond… look at them, to me they are visually a bit like a man-made tree, lacework maybe, or a tangled web.
I found out that no two are the same, like snowflakes or fingerprints.
They look like technology from a time long gone, yet they actually work to keep us connected most of the time.
They are dangerous when they fall over, so ultimately they will disappear to be replaced by underground wires (a much safer option),
but for now – I’m interested in those old weathered timber poles, and the newer green treated ones as well, and the way the light catches the wires creating some interesting patterns in the sky, a little like small branches of a tree!
I don’t expect to win at all – but I’m so excited just to be hung alongside over 50 talented artists! 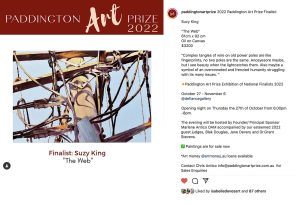 Posted at 20:35h in Uncategorized by KingSuzy 0 Comments
0 Likes
Share

“Suzy King is an established painter who is drawn to the oft unnoticed delights and beauty of what lies above
the everyday sightlines of the built environment. King urges us to raise our gaze and take in the architectural facades,
the juxtaposition of blue skies and rooflines,the patina of history revealed in layers of peeling paint.
The works in Just look Up!: An exhibition of observations above and beyond around the New England were created from the residency
King undertook at NERAM,and are a warm, appreciative view of surprising elements from around the region.” — NERAM September 2022

I sent the paintings to the gallery for installation, but I couldn’t be there until the day before the opening.
When I saw the work on the walls I was blown away by the hang! The walls are dark, the lighting is superb, and work looks amazing!
A HUGE thank you to NERAM, especially Belinda Hungerford for your support in curating the exhibition, and the team at NERAM for a wonderful opening.
It’s a beautiful (big) gallery with much to see as exhibitions run in parallel, a good thing (if you don’t like my work, there will be something you like!).

Posted at 17:36h in Uncategorized by KingSuzy 0 Comments
0 Likes
Share 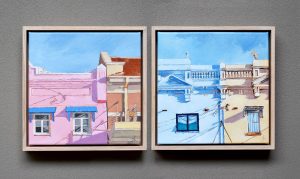 I was invited to take part in a PopUp Exhibition at Orange.
The exhibition (was very big!) was organised and presented by Paper Pear
at the Corner Store Gallery, Orange in July.
The Corner Store was once a real corner store but is now a very popular art gallery.
This was a huge exhibition with over 150 works of art on show over ten days.

Shadow Dancing #1 and #2
🔴  Both paintings sold at the exhibition. A big thank you Steph and Pear in Orange!

Posted at 12:26h in Uncategorized by KingSuzy 0 Comments
0 Likes
Share

June has been an exciting (and busy) time for me!

FIRST… I have achieved Fellow status of the Australian Society of Marine Artists!

It’s an honour and a privilege to be included in this select group of the very best marine artists in the country!
It’s really very humbling to know that the Fellows voted for me to join the fold. This is a lovely birthday present indeed!
Suzy King FASMA⚓️

SECOND… an invitation for an artists’ residency at the New England Art Gallery & Museum in Armidale!

I am so excited to do this. It will be my very first residency, and even more special is that I was invited (I didn’t apply).
I will be away exploring the New England in late July and the work created will result in a solo show at NERAM in late September.
Details to follow…!

AND… almost all my paintings have 🔴  Sold Out at the Moree Gallery!

I’m very lucky to have such a great relationship with the Moree Gallery (they have supported me for quite a few years now).
If you are heading up that way on a road trip, it’s a “must do” to drop into the Gallery and spend some time in this friendly Art Deco town.
There will be a new collection of my paintings in the Gallery in October/November, so keep and eye out!
More amazing news to follow soonish… I hope!
Read More

Posted at 09:08h in Uncategorized by KingSuzy 0 Comments
0 Likes
Share

I was invited to take part in a small group show at the Weswal Gallery, Tamworth in March.
It’s a lovely gallery set high at the end of Brisbane Street (and with a great cafe!). Kate, the owner, was very generous to show me around and chat about the broad range of her artists and our group show which was called “Streets of My Town”. In my case that’s actually “suburb” but that was ok.

The interesting thing in a show – to me anyway – is how different artists approach the same subject. I love that.
🔴  Both paintings sold in the exhibition. A big thank you Weswal Gallery!

Posted at 13:24h in Uncategorized by KingSuzy 0 Comments
0 Likes
Share

I’m happy to be invited to participate in the Toowoomba Art Show again this year.
The physical show is over now but the exhibition continues online until 15 April.
One sold! One to go.

This is looking at Cockatoo Island in Sydney harbour from Birchgrove. The Island has a long
and complex history – serving as a meeting place for the Traditional owners and Custodians
of the region before colonisation, it later became a convict gaol, a naval dockyard, a school
for girls and a reformatory. It’s strong evidence of a heavy industrial past remain intact. 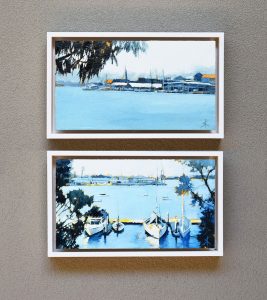 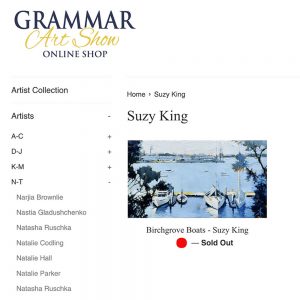 Posted at 14:09h in Uncategorized by KingSuzy 0 Comments
0 Likes
Share 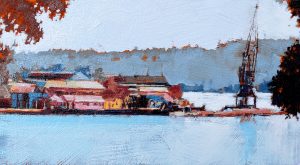 My little painting Birchgrove 1 has been selected as a finalist
in the Waverley Woollahra 9×5 Landscape Prize!

It’s the first time I have entered this so it’s very exciting!
The judges, artists Susan Baird and Paul McCarthy, spent many hours choosing 101 finalists
from over 600 entries.
“This year’s 9×5 entries were a wonderful collective of varied and interesting works. We would like to congratulate everybody for submitting works, making it a very rewarding task deciding on the final exhibition. There were many stand out pieces amongst those submitted and the overall standard was quite high. Deciding on the finalists was a very big task and as judges we were looking for design, composition, and execution.”
Robert Enemark, Curator WWAS 9×5 Landscape Prize

Posted at 18:22h in Uncategorized by KingSuzy 0 Comments
0 Likes
Share

I’m thrilled that this painting was awarded a Highly Commended in the
Australian Society of Marine Artists Silver Anniversary National Exhibition!

This is extra special, as the Judge was renowned marine artist Ian Hansen.

The painting shows a pocket of Sydney Harbour that was once part of the busy industrial waterfront,
then, later, became home to the Sydney Heritage Fleet (where a collection of beautiful vessels
of historical significance underwent years of meticulous restoration and rejuvination), and a quiet spot
for the rowers. The whole area is now undergoing seriously major changes – it will never have
his sense of tranquility and history again.

White Bay, As You Were
oil on canvas, 61 x 153cm (sold)
Reproduction are available (editions limited to 10)

Posted at 18:40h in Uncategorized by KingSuzy 0 Comments
0 Likes
Share

A few years ago I was commissioned to paint some various views of Balmain looking out at water.
The first painting here was part of a series of nine such views. I always liked this beautiful old timber boat,
but knew nothing about it at the time. Later, I painted a larger variation focusing more on the boat,
and entered it in the Mission to Seafarers art exhibition in Melbourne.
Now… I’m thrilled to say… my painting of the Tribal Warrior (entitled The Last Lugger)
has been selected for the First International Marine Art Exhibition!

Hosted by the American Society of Marine Artists, this specialised exhibition features 150 works by the world’s
leading marine artists. Yes! I’m so excited to be included in the exhibition, and alongside some international
artists whose work I have respected and admired for years. I’m pleased that this work is part of the Australian
contingent because Tribal Warrior has a long history, from the harsh pearling industry of yesterday to
the important work of today.

Pearling luggers of the 1800s were wooden gaff-rigged ketches with low waists working Australia’s
northern seas.Their graceful lines were a magnificent sight as the fleets entered the open sea under sail.

During WW2, many boats were requisitioned by the Australian Navy or various uses, then, as the industry
was declining, many boats were refitted for prawning and other commercial fishing activities. Cultured pearling
was finally introduced in the 1970’s.

Today only 14 boats remain.
Tribal Warrior is the oldest lugger still afloat. Repurposed as a maritime training and mentoring vessel for young Indigenous sailors, and for traditional cultural day cruises, you could say she has turned full-circle.
Today she resides in the calm waters of Blackwattle Bay in Sydney Harbour. Tribal Warrior website