Posted at 12:25h in Uncategorized by KingSuzy 0 Comments
0 Likes
Share

Welcome 2018! I don’t like to speak too soon but this is shaping up to be a very good year.
This commission of local peninsula details has just been delivered, and another series
is under way (of iconic local views). Rooftops and power poles are in high demand as well
so there will be more of those coming very soon. 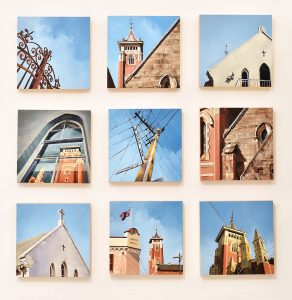 Posted at 13:49h in Uncategorized by KingSuzy 0 Comments
0 Likes
Share

As 2017 comes to an end, I want to thank you all for collecting my work and supporting me during this past year.
Your kind words and encouragement are much appreciated and it’s been a fantastic year, thanks to you!

The painting here, Terraces & Towers, was the very last of my Very Small Paintings completed in 2017 (now sold).
I’ll be working on new ones near the end of January after a short break.  And in 2018…  a couple of private commissions
under way and to be completed early in the year.
And after that… come back, visit this site and instagram @suzykingartist to find out!

Posted at 14:50h in Uncategorized by KingSuzy 0 Comments
0 Likes
Share 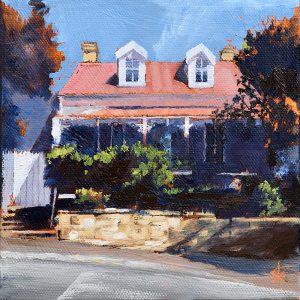 I often get asked to do commissions for Very Small Paintings.
Sometimes for the people who want a record or memory of their own house
or street – sometimes as a gift for someone else. Either way, I’m happy
to do that (it’s so nice to be the artist selected!). Often however, these can
be a little complicated for various reasons, so my fee is a little higher
than my Very Small Painting prices. Not much, just a little.
Of course I’m happy to paint large commissions as well.
Email me to discuss your commission. 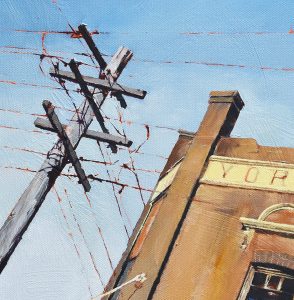 I love Community events! Celebrating 22 years, the Balmain Art Show
has grown to be one of the Inner West’s most popular art & craft fair on
the Balmain Peninsula. I’m so happy to be part of this show.

Last year I showed a series of Peninsula Rooftops which I’m proud to say,
were a great success!  So here we go again… Peninsula Rooftops II.
These are small oil paintings, 33 x 33 cm, of familiar local facades,
rooftops and open skies. And the odd telegraph/power pole.
On Saturday and Sunday entry is free, so drop by – there’s art, craft, markets
entertainment, face painting & amusements for kids too!

Posted at 01:48h in Uncategorized by KingSuzy 0 Comments
0 Likes
Share 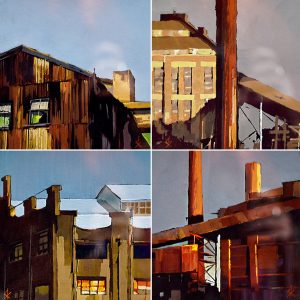 Abandoned since 1983, White Bay Power Station stands silent in decay,
wearing rusting corrugated iron and red brick, broken windows
(now boarded) and tufts of grass, while it waits, and waits, and waits
to seewhat the future will bring. I have been painting this crumbling
structure for about eight years – I will miss it when it’s been cleaned
up and/or developed. Hopefully it will be sympathetic (like the Substation
in Melbourne or some of the ex power stations in the UK).
For now, I will keep painting what’s left of this awesome structure.
These small, beautifully framed gouache (opaque watercolour) paintings
of White Bay are now available at Gallery 503.

Posted at 01:35h in Uncategorized by KingSuzy 0 Comments
0 Likes
Share 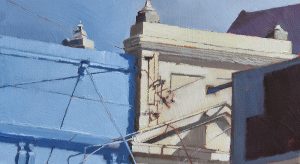 That Framing Place was established by local photographer
Lynn Pearce in 1987. Lynn had a vision for That Framing Place –
to deliver a bespoke framing service using onlythe finest materials
and quality craftsmanship. Now thirty years on, Lynn has built a well-loved,
local business with a loyal following.
To celebrate 30 years on the peninsula, Lynn has invited an A-List
of local artists and creators to pay homage to the communities of Balmain
and Rozelle that have always supported her. I’m very happy to have been
invited to be a part of this special exhibition. This painting is a detail of one of six rooftop paintings I have included in the show.
Exhibition dates: September 30 – October 26.
Join us  – to celebrate – from 5pm 30 September @gallery503
503 Balmain Road Lilyfield (Opposite Callan Park) 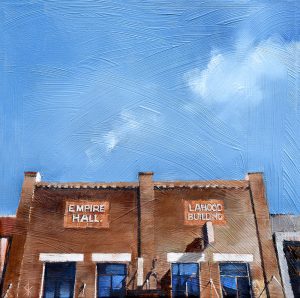 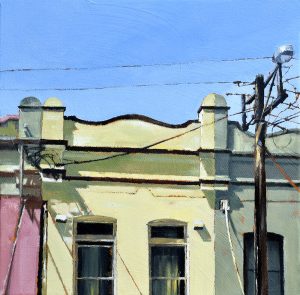 Posted at 09:37h in Uncategorized by KingSuzy 0 Comments
0 Likes
Share 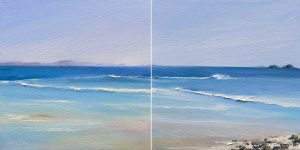 I’m having a few paintings on show in July at The Milk Factory Gallery in Bowral.
Like this one, they are of the coast, warm and sunny – and perfect to warm you up on a chilly winters’ day.
And better still, everything is seriously on SALE!
This is an annual event – a big salon style exhibition with all work heavily discounted.
The Southern Highlands is perfect for a winter getaway, open fires, brisk air, and great art.

Posted at 05:20h in Uncategorized by KingSuzy 0 Comments
0 Likes
Share 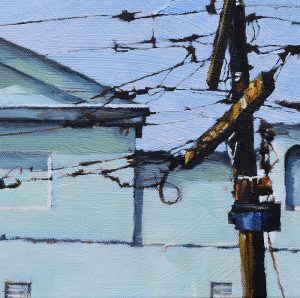 This is a detail of one of my new Rooftop paintings currently underway.
Looking up at the tops of old buildings, mostly untouched by renovation,
with the blue sky beyond – is such a contrast to the ground level we see every day.
There’s a whole world of many beautiful things to look at when looking up!
More details about the paintings will be posted here soon.